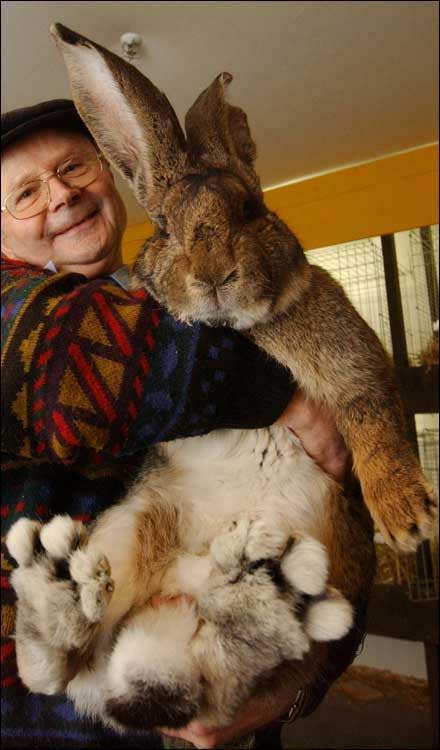 German Giant, one of the biggest bunnies on the face of the planet, tips the scales at 17 pounds — almost seven pounds more than the average rabbit of his breed.

And he’s still growing, according to German breeder Hans Wagner (above), whose hair-raising angora hare was the highlight of a recent rabbit fair in Berlin.

To find out how unusual Wagner’s wabbit is, The Post contacted Six Bells Rabbitry in Arvada, Colo.

“That’s a huge animal. That’s amazing,” said breeder Michelle Jones. “In the States, it’s hard to get them past 12 to 15 pounds.”

How did German Giant get so big?

“I don’t feed him an unusual diet,” said Wagner. “He goes through more than his brothers and sisters, but he eats the same food mix. His favorite food is actually lettuce. He can never get enough of it.”

Herr Hare is unusual in another way, he noted. “Unlike some other rabbits I’ve had, he’s really a gentle character — a gentle giant.”